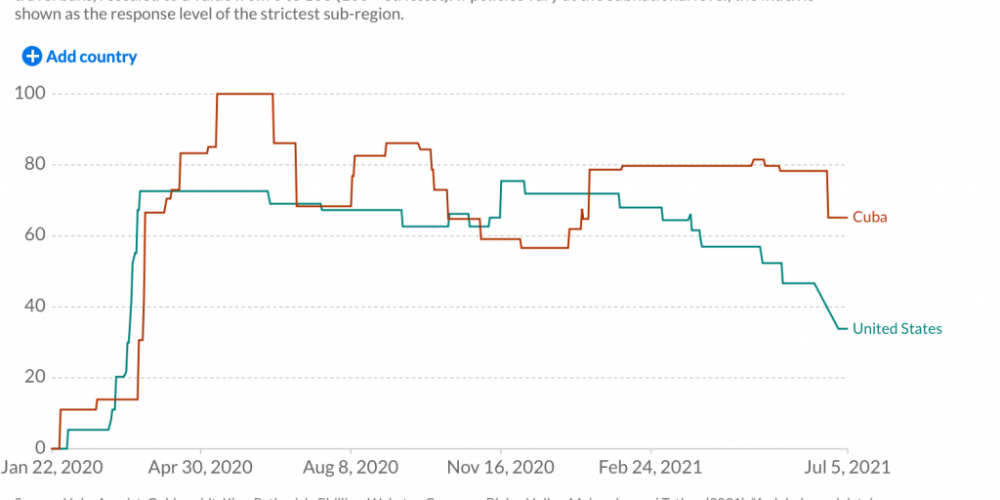 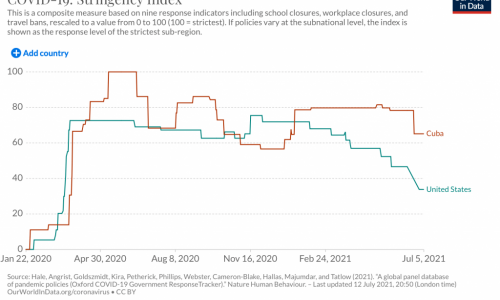 Is Cuba finally blowing up? It’s impossible to say but the images that average people, gathering spontaneously on the streets, somehow managed to upload – despite internet shutdowns, censorship, and blackouts – are riveting. Perhaps socialism in that country has finally reached its breaking point, 30 years after this totalitarian model of social/political organization met disgrace everywhere else in the world.

The U.S. has been hoping for some six decades to unseat the Communists who won a revolution in 1959, and installed not justice and equality as promised, but a crushingly despotic regime that has gradually driven the country into a revanchist disaster.

The U.S. sanctions against the one-time ally have done nothing for decades but provide the regime a reliable scapegoat for the people’s sufferings. Despite unrelenting emigration and largely quiet anger on the part of the people, nothing seems to have fundamentally destabilized the regime.

Then came the Covid lockdowns.

They were not only a main driver of poverty and inequality. They also provided a fantastic pretext for governments all over the world to do to their citizens what they wanted to do anyway, which is to restrict human rights and control every movement of the people. This time they could do it in the name of public health, and with the blessing of science.

Cuba was merely following the example of China, Italy, the US, and the UK! No one knows precisely what the takeaway from these catastrophic 16 months will be but this green light to the despots of the world is surely among the worst.

The World Health Organization itself has been slightly squeamish about how its “public health measures” have empowered despots. “All too often,” it still said in a report, “COVID-19 responses have been top down, and have failed to engage those affected, especially vulnerable and marginalised groups, undermining public health and human rights for all.”

Indeed, the Cuban regime was all about stringencies to control the virus. On March 18, 2020, government seized the moment and imposed all-possible “nonpharmaceutical interventions” that Anthony Fauci and Deborah Birx recommended, including stay-at-home orders and comprehensive orders on any gatherings. By the spring of last year, the stringency index clocked an astonishing 100%, which might be a global record. I’ve yet to discover any regime as scrupulous about Covid rules. 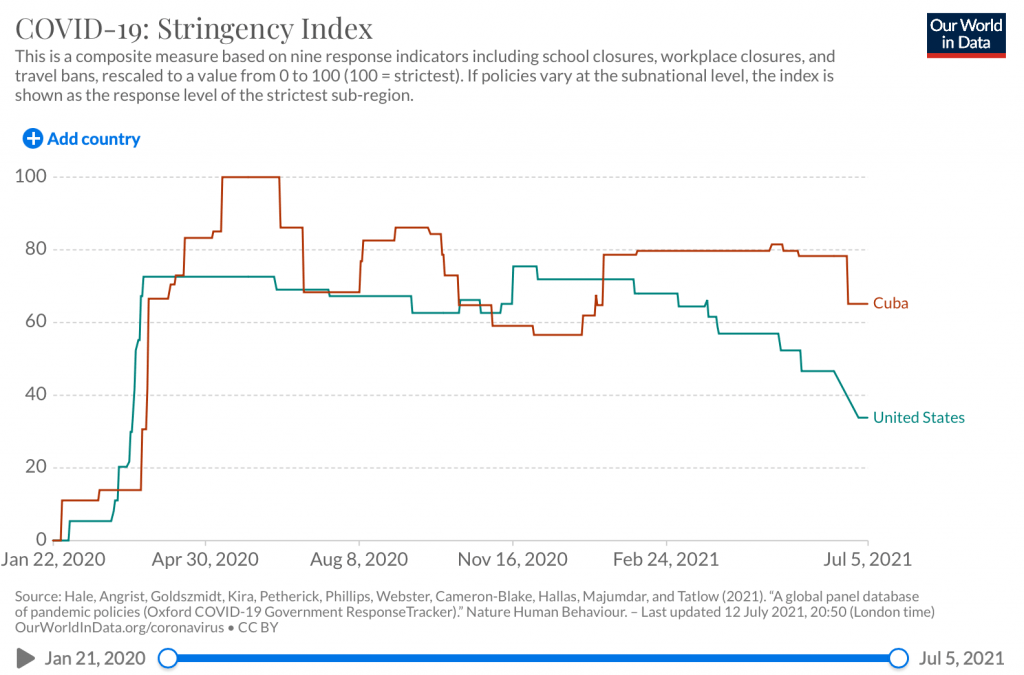 For doing this, for taking away whatever few rights the people had, and they were very few in any case, the regime enjoyed huge praise for its brilliant response, precisely as it has enjoyed for decades from partisan leftists. “Cuba’s response to the COVID-19 threat was swift and effective,” writes Ian Ellis-Jones for Green-Left, an Australian information source that can admire Cuba at a safe distance. “Cuba’s response to COVID-19 has been much better than many other countries including the US.”

“Cuba has several advantages over many states,” wrote two academic researchers in The Conversation, “including free universal healthcare, the world’s highest ratio of doctors to population, and positive health indicators, such as high life expectancy and low infant mortality. Many of its doctors have volunteered around the world, building up and supporting other countries’ health systems while gaining experience in emergencies. A highly educated population and advanced medical research industry, including three laboratories equipped and staffed to run virus tests, are further strengths.”

“Also, with a centrally planned, state-controlled economy,” wrote these two authors in a dream-like state, “Cuba’s government can mobilise resources quickly. Its national emergency planning structure is connected with local organisations in every corner of the country.”

But wait (to continue with sarcasm), Cuba’s brilliant scientists came up with not just one but four vaccines! Wrote the New York Times just last month: “Throughout the pandemic, Cuba has declined to import foreign vaccines while striving to develop its own, the smallest country in the world to do so. The announcement places Abdala among the most effective Covid vaccines in the world.” Also, from the NYT, “the high announced rate of efficacy could reinforce hopes that biotechnology exports will help lift Cuba from the depths of its economic crisis.”

Fascinating, isn’t it? Before the current crisis, I had no idea that Cuba was being celebrated for its glorious vaccine program. It’s all just a bit odd, now that I look it up. I say this because once the protests began, some media outlets were saying that the people on the streets were there to demand Covid vaccines! Probably there is a germ of truth there, but also food, electricity, and basic antibiotics would also be nice.

What to make of this economic crisis itself? Cuba’s regime controls over enterprise has forced a situation in which the country produces nowhere near the amount of wealth necessary to sustain its population. It must rely on tourism and dollars arriving from around the world. But lockdowns, which were global, collapsed visits to the once-utopian island paradise by 90%, denying the regime the capacity even to live at others’ expense.

It was these lockdowns, not only in Cuba but around the world, that seem to have flipped the switch. Faced with desperate conditions of no food, no medicine, sketchy power, and very little of anything necessary to survive, the desperate population seems to have had enough. They have astonished the world by pouring into the streets to demand an end to the regime.

Freedom!, they are yelling on the streets. So should we all.

How significant is this? It’s huge. Despite all odds, the Cuban tyranny has somehow survived every bit of pressure to change and adapt to the modern world. The Covid lockdowns might finally be doing to the system what no amount of outside pressure could ever accomplish. It has inspired the average person finally to say: I have nothing to lose; without freedom, my life is nothing.

What is true in the desperately sad situation in Cuba is also true for the whole planet. Lockdown is nothing but government control of your life. It is incompatible with prosperity, health, peace, and human flourishing. Lockdowns set the world on fire, even raising questions about one of the world’s most entrenched tyrannies.

May the end result inspire a global push for freedom. Not just in Cuba.

Jeffrey A Tucker · 2 hours ago
@jeffreyatucker
Extremely weird that @LinkedIn keeps censoring this article. Why? https://t.co/mbz8OluAwy
View on Twitter
15
34

Jeffrey A Tucker · 3 hours ago
@jeffreyatucker
The Science Too Is Captured https://t.co/85h6oW4lQi
View on Twitter
6
36

In reply to
I'll be sharing later some truly hilarious stories of our time together, such as the time that he served an ambassador and his wife raw bacon, much to everyone's horror. Anyway, a wonderful and brilliant man.
View on Twitter
0
29

In reply to
there was never a chance that Russia would nuke anyone because the workers were certain that if they ever tried, they would blow themselves up first. Decades went by without good replacement parts for anything as simple as tractors.
View on Twitter
2
24

In reply to
reformers, and set me and many straight that Gorbachev was in no way the liberal many in the West saw him as. In fact, Yuri's view was that Gorbachev's war on alcohol was what led to the undoing of the empire. Plus, nothing worked in Russia. Nothing. Yuri always knew that
View on Twitter
1
15

Jeffrey A Tucker · 3 hours ago
@jeffreyatucker
Very sad about the death Yuri Maltsev. Very soon after he defected from Russia (1989), we became fast friends and eventually best friends. We collaborated on many projects over those years, and his insights were invaluable. For he had worked closely with the Gorbachev team of
View on Twitter
6
65

Jeffrey A Tucker · 7 hours ago
@jeffreyatucker
The West Must Never Again Go Totalitarian https://t.co/zqC4im2VQ9 via @brownstoneinst
View on Twitter
18
70

Jeffrey A Tucker · 9 hours ago
@jeffreyatucker
The Impending US ICD Vaccine Passport and Its Unconstitutionality https://t.co/gJAZNT3vja via @brownstoneinst
View on Twitter
37
82