I’ve rarely been as charmed by a country or culture as I have been in my many visits to Australia. It always struck me as a peculiarly civilized country. The people seem well educated. The schools work; at least they seem to and better so than in the US. The people are friendly and polite. Even the police seemed helpful, and that’s generally true of the entire public sector.

We aren’t used to this in the US, so I found myself startled by it. The US is bad at government; Australia (like some other commonwealth countries) seems comparatively good at it.

As an example, I was at the airport in Melbourne and was buying something on my way into the city. I reached for my wallet and it wasn’t there. There was a moment of panic and I whispered the problem to the cashier. She immediately contacted security. Everyone began scrambling around.

Meanwhile I retraced my steps. It turns out that my wallet fell out in some security check during which I took off my coat. An airport security employee found it, I retrieved it easily, and everyone who figured out what was happening cheered. There were smiles everywhere among the security staff. I was amazed and thrilled.

It’s a small story but it makes the point. My impression was that this is an earnest country of people who all work for the good life. Sometimes the downsides of a foriegn culture are less visible to visitors, so I assumed there was some truth to what the citizens were telling me, namely that there was too much deference to government, that illiberalism pervades all political parties, that the people there allowed their weapons to be taken away, that there is a collectivist spirit in the culture that is highly dangerous.

Whatever the reason, the cultural infrastructure that had made life in Australia free, prosperous, and generally good did not protect the country against a mad rush into totalitarianism. I really cannot say why this highly civilized country that seemed to love freedom chose the path of utter brutality and compulsion. But from the moment the virus came along, there was universal agreement among employees of the public sector that they would keep the virus out of the country, as if a pathogen could be controlled like an import.

They would literally try to block a virus from their borders. It’s absurd. Even more than that, it is dangerous. Centuries of experience have proven the grave dangers associated with naive immune systems; they pose an even greater risk to human life than wars or cancer. When smallpox first came to the US, it ended up wiping out one third of the native population. There are hundreds of cases of isolated tribes that were destroyed merely from first contact with a new pathogen.

We mostly avoid this problem today due to vast travel and trade the world over. Our immune systems have adapted to become ever more resilient, and that is what enabled outpost islands to become famed travel destinations and traders with and cultural contributors to the whole world.

So what Australia (and New Zealand) attempted was something every scientist has long known to be unworkable in modern times and highly threatening even if it were workable. To be sure, this idea of virus suppression (where does it go?) tempted policy makers the world over. Trump tried something similar in February and March of 2020, and only later came to see the errors of his ways. As bad as the US response has been, we’ve been mercifully spared the fanatical ideology of “zero Covid.”

Not so in Australia. They blocked outward and inward travel. They broadcast all kinds of messages about staying away from people. They closed businesses. Governments monitored social media for anyone straying too far from their assigned area. When they decided to lock down, they went all in. A nation that prided itself on its good government suddenly found itself managed like a vast prison colony.

By the summer of 2020, the country was cheering that they had somehow miraculously defeated the virus. Politicians claimed that Australia was the envy of the world. Their experts had shown the way! The US and the World Health Organization all said that Australia has done a great job. Fauci was full of praise.

That lasted for a few months. The data showing so few cases were helped by a low level of testing. It is actually impossible to know whether and to what extent Covid had been suppressed. Regardless, in the fall of 2020, positive tests began to rise. Then it came to the big cities of Melbourne and Sydney. The politicians took charge, and unleashed hell.

It’s been rolling lockdowns ever since. Protests were at first sporadic, and then more. The Prime Minister got involved and echoed the line of the local governors. The people who are protesting are being selfish, he said. The lockdowns will continue so long as the people are failing to comply, he said, echoing words of a prison guard.

In Australia like the US, the vaccine seemed to provide cover for pulling back on lockdowns. Now that it is here, said officials, restrictions can be removed once enough people get the jab. The trouble in Australia was a lack of public interest in the vaccines. Thus did the mandates arrive, with real ferocity and brutal enforcement.

I spent some time this morning watching the videos from Australia. They feature construction workers protesting against lockdowns generally, but vaccine mandates in particular. They are riveting. They remind me of the TV coverage in the last months of the Soviet Union as people pushed through police, broke down walls, danced on police cars, and raided government offices. That was the end of socialism (before it became popular again 25 years later).

The workers are breaking through police lines, even throwing police to the ground. They are marauding through streets in anger, shouting “freedom.” The police are responding by increasing troop presence and bringing in armored cars. They are firing on whole crowds with tear gas canisters. People are screaming and running. And yet the protests continue and grow.

There is an interesting demographic dynamic at work here. These workers are obviously from the working classes, generally less prosperous and educated than the professional classes. They have their ways of life and like them. They are also less amenable to being bullied by cops and politicians. Generally, their politics lean left as in the laborite left and will vote that way. If they have really turned against lockdowns, and Australian politics responds, it will create some real upheaval. The results could be good or bad; it’s hard to say.

I saw one clip where a nice worker asked a policeman why he was doing all this. The man responded that he hated the lockdowns too, but police work is all he knows how to do so he has to do his job in order to keep his job. If that view is pervasive, Australia really is at a crisis moment. You can’t really keep preposterous levels of civilian control in place if the police doing the enforcing doubt the merit of what they are doing.

What’s happening to the virus in Australia? It nearly went away again from October 2020 (when the elites congratulated themselves again) but returned stronger than ever in the late summer of 2021. 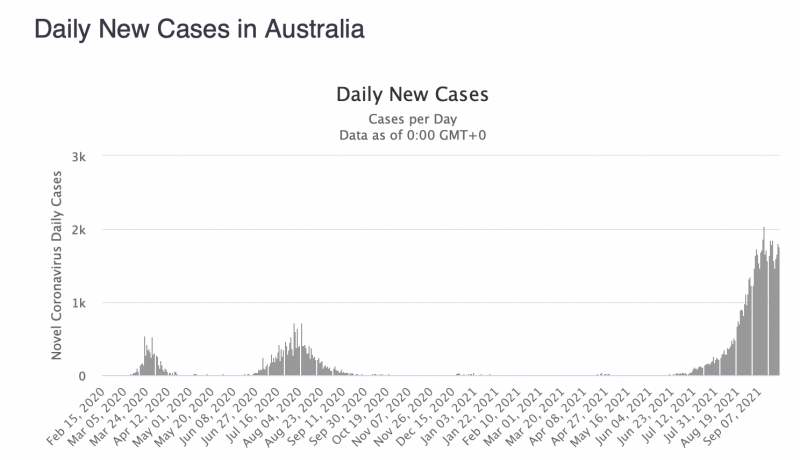 Clearly the stringencies were not working anymore to stop cases. And while politicians will now claim that these protests are the cause of the spread, it’s not true. The protests were prompted by the growing public realization that all their sacrifices of their freedom amounted to nothing. They simply did not work to improve public health.

In the backdrop of all of this is another strange bit of data. Australia has experienced 47 deaths per one million from Covid-19, causing the country to rank #174 among all countries in the world. There have been a total of 1,200 deaths, with a majority of them in ages 80 plus.

Why is this? It’s not vaccines. Is it demographics and health? Maybe Covid has yet to sweep through the country, if lockdowns are ever removed or even if they are not. It should be incredibly obvious that the right approach would have been to encourage vulnerable people to shelter while letting the rest of the country go about life normally. This country-wide, totalitarian response has shattered everything wonderful about the place, and massively demoralized the population. The travel restrictions have been devastating for industry and isolated the place from the rest of the world once again.

Now people are being bullied to get a vaccine, and yet we know now that it does not provide secure protection against either infection or transmission. What that means is that not even the vaccine could provide a way around the lockdowns or an excuse for the politicians to end their war on the people. In other words, the vaccine does not make a significant contribution to reach herd immunity — which defeats the larger point of the vaccine.

That being obvious to anyone paying attention, people have become desperate. It’s not only in Australia. Protests are growing all over Europe. They are daily. The crowds are growing and becoming more unruly.

It could be that virus control — which was never going to work the way they said — will become the spark that lights a raging political fire all over the world. What we see in Australia today might be a look into our own future. States all over the world have overreached, attempting the impossible while fundamentally attacking the rights and liberties of the people. The resistance is intensifying by the day and hour.

Maybe this revolt against the system is something to cheer. Government policy has made resistance seem like the only option. The end result, however, may not be a smooth restoration of rights and liberties. As Lord Sumption points out, after people have lost faith in their laws and institutions, and the general idea of democracy, the result is not usually emancipation but authoritarianism and totalitarianism.

Thousands of Australian construction workers against mandatory vaccines took to the streets of Melbourne.

Police warned protesters to leave and protesters responded with chants of “everyday” signifying they will protest everyday.
pic.twitter.com/BmK4CPIcTd

Australian police used bullets on protesters in Melbourne on the third day of protests yesterday pic.twitter.com/CRYPBfyFZX

Jeffrey A Tucker · 13 minutes ago
@jeffreyatucker
Massive propaganda back in the day. Debunking gets no attention https://t.co/bQ93bby1Mg https://t.co/2B9sramycZ
View on Twitter

Jeffrey A Tucker · 1 hour ago
@jeffreyatucker
This app uses retail APIs to generate an open-source and real-time CPI: https://t.co/12TL1FmDeg
View on Twitter
2
17

Jeffrey A Tucker · 2 hours ago
@jeffreyatucker
After Summer, Europe to Target the Unvaccinated https://t.co/w84PW6gBtt
View on Twitter
33
33

Jeffrey A Tucker · 2 hours ago
@jeffreyatucker
She turned her country into a prison state in the name of virus control, and yet she is cheered at Harvard. Just incredible. What a time! https://t.co/RbdWNUABLK
View on Twitter
102
443

Jeffrey A Tucker · 19 hours ago
@jeffreyatucker
A 14.4% split between approve and disapprove. It's a record. https://t.co/4WHYJlaHpE
View on Twitter

Jeffrey A Tucker · 20 hours ago
@jeffreyatucker
Thoughts on the Pulitzer Prize for Covid Coverage https://t.co/RoAO8o73Rl
View on Twitter
9
31

Jeffrey A Tucker · 21 hours ago
@jeffreyatucker
Remember How "the Science' Dictated Lockdowns? https://t.co/sEnPGXGkhL
View on Twitter
19
56

Jeffrey A Tucker · 22 hours ago
@jeffreyatucker
The Loss of Trust Is Well Earned https://t.co/QhfQGMwE7N
View on Twitter
15
60