A continuing mystery  is how it is that so many governments in so many different places on earth could have adopted the same or very similar preposterous policies, no matter the threat level of the virus, and without firm evidence that interventions had any hope of being effective.

In the course of two weeks in the second half of March 2020, traditional freedoms were zapped away in nearly all developed countries. In a seriously bizarre twist, even the silliest policies replicated themselves like a virus in country after country. Nothing like this has ever happened in response to a new virus.

For example, you could not try on clothing in a store in Texas or in Melbourne, or in London or in Kalamazoo. Why was that? We’ve always known that the COVID bug is least likely to live on fabrics unless I have symptoms of it, sneeze on my handkerchief and then I stuff it in your mouth. The whole thing is a ridiculous mysophobic overreach, like most of the rules under which we’ve lived for 20 months.

Then there was the inside/outside confusion. First everyone was forced indoors and people were arrested for being outdoors. Later, once restaurants started opening, people were not allowed indoors so eating establishments scrambled to make outdoor dining possible. Are we supposed to believe that the virus lived outside for a while but then later moved inside?

Or consider the kabuki dance of masks. Seriously, no one actually believes that they stop the spread when you are standing but are not necessary when seated, unless you are on a bus, train, or plane. This is just stuff we do as compliance theater, because we are forced to or because we want to demonstrate our political loyalties. None of it has anything to do with public health.

Or the plexiglass. Here we have something that everyone knows is silly. It’s super annoying. But it makes the symbolic point: stay away from other human beings! That’s a heck of a message to get from governments.

Or the curfews. So many places had them despite a complete absence of evidence that COVID spread prefers the night to the day. I guess the real point was to put a stop to revelry that might bring people together in a fun way? It’s like all our governments decided on the same day that COVID spreads through smiles and fun, so we had to banish both.

And this 6-foot rule is highly suspect too. It seems to imply that if you get too close to each other, COVID spontaneously appears. At least people seemed to believe that.

Australia, in its way, even created a slogan and a jingle to go with it. “Staying Apart Keeps Us Together,” says Orwell, I mean, Victoria.

Socially distance! Don’t be a silent spreader! Even though the largest study yet has shown that “asymptomatic cases were least likely to infect their close contacts.” Which is to say, this is mostly nonsense.

In most places too, you had to quarantine two weeks when you arrived from afar, even though it is rare that the virus incubation period is that long. The mean period is 6 days, perhaps, which is what one would expect from a coronavirus like the common cold.

Oh, and in department stores, you could not spray perfume to try it out, because surely that spreads COVID – not. Except that there is not one shred of evidence that there is any truth to this. This one seems completely made up, though it is widely imposed.

The list goes on. The bans of gatherings over 50 outdoors and 25 indoors, the closures of gyms at a time when people need to be getting healthy, the shutting of theaters and bowling alleys but the keeping open of big-box stores – these policies were as ubiquitous as they are unsupported by any science. And we’ve known this for many months, ever since the media meltdown over Florida Spring Break of 2020 ended up in zero fatal cases contracted at the revelry.

The worst case is school closings. They were shut down at the same time all over the world, despite evidence available since at least January that the threat to children is nearly zero. Sweden was the exception and the kids were fine.

Yes, students do get COVID almost entirely asymptomatically, which is to say they do not get “sick” in the old-fashioned sense of that term. What’s more, they are highly unlikely to spread it to adults precisely because they do not have symptoms. This is widely admitted.

Still governments decided to wreck kids’ lives for an entire year or two.

And the timing of it all seems strangely suspicious. All these countries and states implemented this compulsory clown show at the same time, whether cases were everywhere or nowhere.

In the U.S., this was fascinating to watch. The shutdowns happened all over the country. In the Northeast, the virus had already spread. The South shut down at the same time but the virus wasn’t even there. By the time the virus did arrive, most states in the South had already reopened. The virus doesn’t seem to care either way.

Now, looking at this it is very easy to go to conspiracy as the explanation. There is probably some secret hand at work somewhere that is guiding all of this, the thinking goes. How can so many governments in the world have simultaneously lost their marbles and abolished the people’s liberties in such a cruel way, while trampling on all rights of property and association?

I tend to resist big conspiracy theories on this subject simply because I seriously doubt that governments are smart enough to implement them. From what I can see, these governors and statesmen seemed to be making things up in a crazy panic and then sticking with them just to pretend that they know what they are doing. To this day, they are sticking to the script, and the media is giving them cover.

How can we account for the imposition of so many similarly ridiculous rules at the same time across so many parts of the globe?

I invite you to examine a very interesting study published by the National Academy of Sciences: “Explaining the homogeneous diffusion of COVID-19 nonpharmaceutical interventions across heterogeneous countries.”

A clearer title might be: how so many governments behaved so stupidly at once. The theory they posit seems highly realistic to me:

We analyze the adoption of nonpharmaceutical interventions in the Organisation for Economic Co-operation and Development (OECD) countries during the early phase of the coronavirus disease 2019 (COVID-19) pandemic. Given the complexity associated with pandemic decisions, governments are faced with the dilemma of how to act quickly when their core decision-making processes are based on deliberations balancing political considerations. Our findings show that, in times of severe crisis, governments follow the lead of others and base their decisions on what other countries do. Governments in countries with a stronger democratic structure are slower to react in the face of the pandemic but are more sensitive to the influence of other countries. We provide insights for research on international policy diffusion and research on the political consequences of the COVID-19 pandemic.

This seems to fit with what I’ve seen anecdotally. 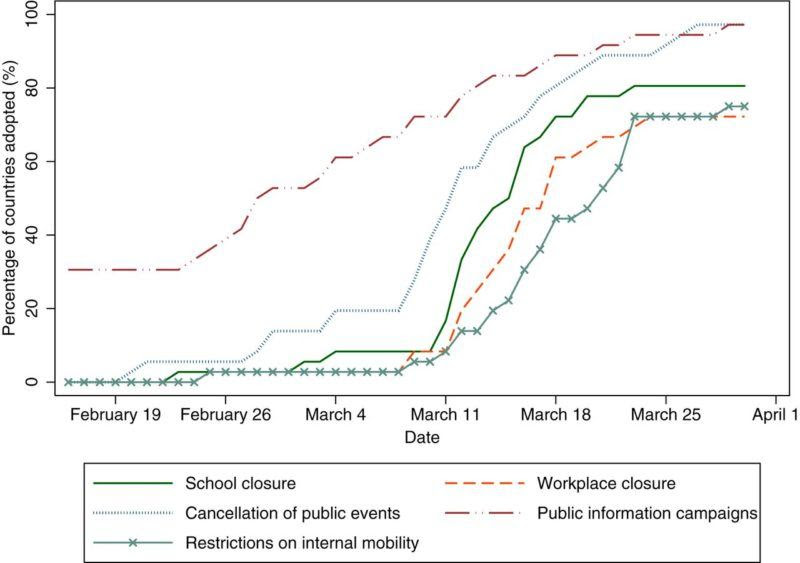 These guys in charge are mostly attorneys with specializations in bamboozling voters. And the “public health authorities” advising them can get credentials in the field without ever having studied much less practiced medicine. So what do they do? They copy other governments, as a way of covering up their ignorance.

As the study says:

While our paper cannot judge what an “optimal” adoption timing would be for any country, it follows, from our findings of what appears to be international mimicry of intervention adoptions, that some countries may have adopted restrictive measures rather sooner than necessary. If that is the case, such countries may have incurred excessively high social and economic costs, and may experience problems sustaining restrictions for as long as is necessary due to lockdown fatigue.

Which is to say: the closures, lockdowns, and imposed stringency measures were not science. It was monkey see, monkey do. Copycat policy. The social psychology experiments on conformity help explain this better than anything else. They see some governments doing things and decide to do them too, as a way of making sure they are avoiding political risk, regardless of the cost.

All of which only increases one’s respect for the governments around the world that did not lock down, did not close business, did not shut down schools, did not mandate masks, and did not push some crazy kabuki dance of social distancing in perpetuity. South Dakota, Sweden, Tanzania, and Belarus come to mind. It takes an unusual and rare level of incredulity to avoid this kind of herd mentality.

Why did so many governments go so nuts at once, disregarding their own laws, traditions, and values by bludgeoning their own people with the excuse of science that has turned out to be almost completely bogus? Some people claim conspiracy but a much simpler answer might be that, in their ignorance and stupor, they copied each other out of fear.

Jeffrey A Tucker · 3 hours ago
@jeffreyatucker
And just like that, the right to travel is ended. https://t.co/xrMEsOPHVT
View on Twitter
88
284

Jeffrey A Tucker · 3 hours ago
@jeffreyatucker
Vaccine companies are discrediting what popular culture calls capitalism. They are making "private enterprise" feel like a racket. The blowback could be devastating.
View on Twitter
12
76

Jeffrey A Tucker · 3 hours ago
@jeffreyatucker
I just cannot wrap my head around the claim that this or that vaccine is "effective" for people for whom the severity of the virus itself approaches 0%. I simply cannot believe that we are expected to take these claims seriously.
View on Twitter
338
1685

Jeffrey A Tucker · 6 hours ago
@jeffreyatucker
In the coming days and weeks, many important famous people are going to be de facto terminated from their previously secure jobs. When this makes the news, there will be an attempt to discredit them, no matter their credentials. Do not believe a word of it.
View on Twitter
215
1150

Jeffrey A Tucker · 6 hours ago
@jeffreyatucker
It's unbelievable to me that anyone would listen to the guy who bears HUGE responsibility for the catastrophic pandemic response on anything related to science. Talk about discredited! https://t.co/2B8VFKSNzz
View on Twitter 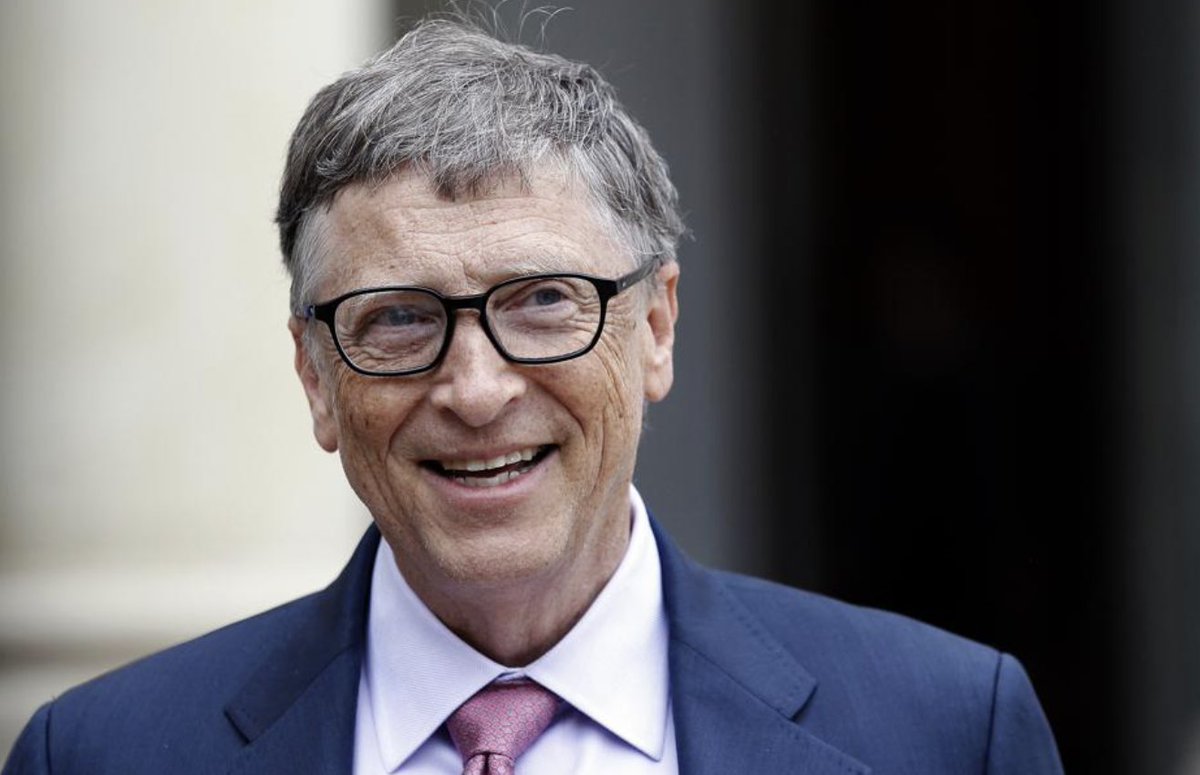 Forbes@Forbes
Microsoft cofounder Bill Gates is letting college students download his book, “How To Avoid A Climate Disaster: The Solutions We Have And The Breakthroughs We Need,” for free—for a limited time https://t.co/LFrT7EZsjP https://t.co/bEFIYGam8e
34
162

Jeffrey A Tucker · 7 hours ago
@jeffreyatucker
https://t.co/lx9dEopN1E
View on Twitter
6
26

Jeffrey A Tucker · 8 hours ago
@jeffreyatucker
The quiet purging of academia is one of the most shocking but least-reported trends of our time. https://t.co/rTjJLJ31YT
View on Twitter
28
76

Jeffrey A Tucker · 10 hours ago
@jeffreyatucker
Re: the Chomsky problem. https://t.co/H7v5onBX60
View on Twitter
8
44