The Human Resource order comes down to you with ferocity: get the vaccine or lose your office access and eventually your job. You are stunned. You had heard that the Biden administration was favoring this but your company has only 150 employees and it lives entirely within the private sector. Surely this cannot be right. Surely there is a way to fight back. Maybe a lawsuit against the mandate is in order.

The HR department says it is only following federal guidelines. So you look for them. You look again and again. Somehow nothing turns up. You can find plenty of statements by Biden and administration spokespeople. You can find hundreds of news stories about the impending regulation. There is no shortage of blustering talk.

What you cannot find is an executive order from the Biden administration. You can find no directive at all. How can something be challenged that doesn’t actually seem to exist?

I was alerted to this strange situation from a discussion with a Republican congressman who finds himself confused about how to challenge this too. He is against the mandate and wanted to find out precisely what the mandate said. But he looked and looked and found nothing. Again, just press statements, and promises to issue something later. He finds himself at a loss about what to do. How can one legislate against a regulation that does not exist?

Meanwhile millions of companies, universities, and industries have already shifted to impose mandates. People are losing jobs everywhere. My inbox is flooded with furious, despairing, frustrated people who don’t want the vaccine because they already have natural immunities or prefer the risk of exposure to the risk of the vaccine itself. Or they don’t have any special reason other than that they don’t want it, period.

But now these people are facing unemployment, and looking elsewhere to work, hopefully for a company with fewer than 100 employees, which, they hope, will not have such draconian expectations for employment.

Writer Alex Berenson has taken notice of this too and did some quick research. He found a blog that says there is no order, confirming exactly what the congressman told me.

If there is no [private sector] mandate yet, then obviously, none of the companies are under any obligation to enforce it.

OSHA is apparently the federal agency responsible for framing a set of regulations for the mandate, including fines. But federal agencies only construct regulations after a law has been passed or an EO is issued.

If I’m correct, and no EO has been published, we have an odd situation, to say the least.

Governors and lawyers have been threatening to sue, because the EO is unconstitutional and overrides state powers. But if there is no Presidential EO, then all these legal cases would be meaningless, because, again, there is no official mandate.

Is the White House stalling? Do they realize the EO and the mandate will be overturned in court? Are they hoping to achieve corporate compliance without an official mandate?

I’ve queried several lawyers. One suggested that so far, in this situation, the feds are mandating by bluffing.

At the Federal Register, we find Biden’s order pertaining to federal agencies as well as one that ropes in contractors but nothing about all companies with more than 100 employees. 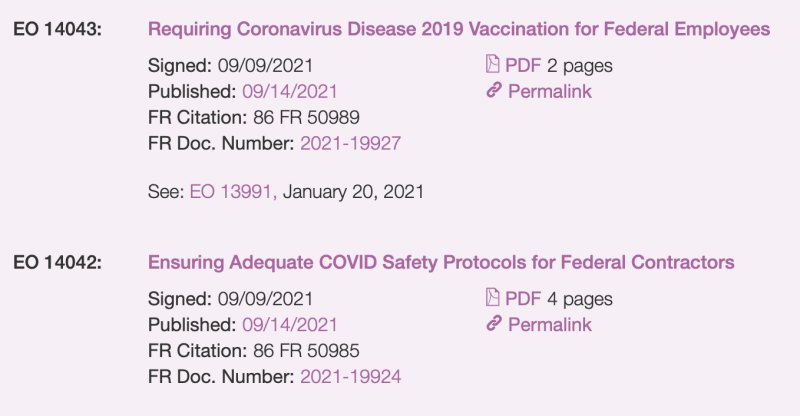 There is some more discussion of this problem at the HR-oriented site Littler. The site does not expect an executive order but rather claims that “President Biden has the authority to direct OSHA to develop an ETS [Emergency Temporary Standard] without issuing an executive order.”

Further: “[t]here will likely be no opportunity for comment before the ETS takes effect immediately upon publication in the Federal Register. The president has asked OSHA to issue the ETS as soon as possible. OSHA will ask stakeholders to provide comment afterwards, when the agency considers approving a permanent standard.”

This ETS thing is a power that the agency possesses in case of “grave danger” to workers. The last time it was deployed was in 1986 as it related to asbestos and its removal (that’s another story for another time). But it is exceedingly rare to invoke this power and it’s never been done over a vaccine. Many serious attorneys are highly doubtful that OSHA even has the authority to expand the scope of the term health this much. In any case, Littler believes that the ETS will be issued in 2 to 10 weeks, and be immediately applicable.

On the other hand, why bother? Millions are already affected, and any company with more than 100 employees is already dealing with the huge mess that the announcement has already caused. Many have complied and many have not, since there is not yet a legal mandate for them to do so. And yet the ever-risk-averse compliance departments of any medium-to-large-size firm are already issuing the orders.

Meanwhile, the opponents of edict are at a loss. There is no edict. There is only a presumption of power, and hence no means of combating it.

Consider the implications of this method of governing. It enables one man to rule an entire country not through law but through words and wishes alone. Biden believes that he has the power to do this, wants to do it, and therefore it is done.

The power is real. The private sector at all levels is adapting. After all, it would make little sense to wait until the regulations are issued since compliance will be expected soon after. All companies will then have to scramble to fire and replace people in their talent pool. It makes sense to adapt now rather than then so the company can move ahead with doing what they are supposed to do.

This method introduces grave moral hazards to the process of governing. The courts have proven themselves disappointingly weak even to battle edicts that are written and hence can be examined and judged by standards of existing legal constraints and precedent. But there is no way to do the same with administrative orders that are merely the product of press conferences and presidential aspirations.

Nor is this problem unique to Biden. If you go back and watch Donald Trump’s March 16, 2020, press conference, held with Drs. Fauci and Birx by his side, he ordered schools and businesses closed, and told people to stay home unless they had necessary reasons to be out and about. It’s clear that he believed that he was shutting down the whole economy to battle a virus.

This afternoon, we’re announcing new guidelines for every American to follow over the next 15 days as we combat the virus. Each and every one of us has a critical role to play in stopping the spread and transmission of the virus. … Therefore, my administration is recommending that all Americans, including the young and healthy, work to engage in schooling from home when possible. Avoid gathering in groups of more than 10 people. Avoid discretionary travel. And avoid eating and drinking at bars, restaurants, and public food courts….If everyone makes this change or these critical changes and sacrifices now, we will rally together as one nation and we will defeat the virus.

Did he have the power to do that? Of course not. Notice his use of the nebulous terminology about guidelines, rules, and recommendations, followed by exhortations to comply. Still, this country still retains some semblance of federalism. His defenders have since said that he did not actually lock down the country because he had no power to do so. Regardless, it’s very clear that he believed that he had that power and believed that this is precisely what he was doing.

Remarkably, it was done. The states hopped on board and complied, following the HHS directives that had been issued already days earlier. The states were the teeth but he was the mouth. The highly watched press conference accomplished it on its own without any real executive order. The country and economy froze. This was partially due to public panic and partially due to the expectation that the federal government has unlimited powers, so surely the president would not make such statements without the ability to enforce them.

It is the same with the Biden vaccine mandate for private-sector companies with more than 100 employees. It’s true that Biden does not have the power to impose that directly but he might have the power to order a regulatory body under his authority to write rules that amount to the same thing. And even if the regulatory agency never gets around to it, the perception that the order is real and enforceable is enough to cause the outcome he desires.

It’s government by wish and command – rule via exhortation – rather than law and the accountability that comes with that. That is not public health. It is not good government. It is not freedom. It is not anything we associate with living in a civilized society.

Jeffrey A Tucker · 6 hours ago
@jeffreyatucker
Sorry, watching this is a very guilty pleasure. https://t.co/nJ3cs4GAJE
View on Twitter
49
312

Jeffrey A Tucker · 8 hours ago
@jeffreyatucker
Extremely weird that @LinkedIn keeps censoring this article. Why? https://t.co/mbz8OluAwy
View on Twitter
20
50

Jeffrey A Tucker · 9 hours ago
@jeffreyatucker
The Science Too Is Captured https://t.co/85h6oW4lQi
View on Twitter
9
42

In reply to
I'll be sharing later some truly hilarious stories of our time together, such as the time that he served an ambassador and his wife raw bacon, much to everyone's horror. Anyway, a wonderful and brilliant man.
View on Twitter
0
42

In reply to
there was never a chance that Russia would nuke anyone because the workers were certain that if they ever tried, they would blow themselves up first. Decades went by without good replacement parts for anything as simple as tractors.
View on Twitter
2
38

In reply to
reformers, and set me and many straight that Gorbachev was in no way the liberal many in the West saw him as. In fact, Yuri's view was that Gorbachev's war on alcohol was what led to the undoing of the empire. Plus, nothing worked in Russia. Nothing. Yuri always knew that
View on Twitter
1
31

Jeffrey A Tucker · 9 hours ago
@jeffreyatucker
Very sad about the death Yuri Maltsev. Very soon after he defected from Russia (1989), we became fast friends and eventually best friends. We collaborated on many projects over those years, and his insights were invaluable. For he had worked closely with the Gorbachev team of
View on Twitter
9
106

Jeffrey A Tucker · 13 hours ago
@jeffreyatucker
The West Must Never Again Go Totalitarian https://t.co/zqC4im2VQ9 via @brownstoneinst
View on Twitter
18
72