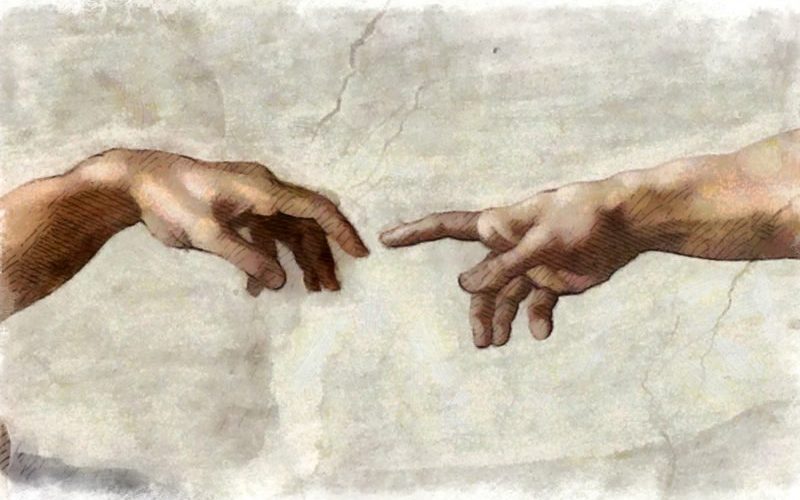 Have you noticed how philosophical COVID-19 is making us? The possible presence of imminent death of so many – true or not – is causing a reassessment of fundamental issues.

I’m not just talking about the issue of which groceries we should stockpile. The answer to that question based on what I observed at Costco last week is apparent: toilet paper.

For example, in private conversation, a friend of mine offered an interesting view of COVID-19. He said, look, why actually should we care when people die in large numbers from disease? Maybe this is nature’s way of culling the population of less healthy people. Happens in the animal kingdom all the time. Why get all emotional and freaked out about this?

He was very serious. I’m guessing you have heard some version of the same.

Before you dismiss the observation entirely as ghastly and cruel, I can promise you that this view is oddly common among people who have read just enough Darwin to get the main point, particularly his expressed regrets about life-saving medical advances (it was just a tossed-off observation he had that went very wrong).

There is reason to believe that vaccination has preserved thousands, who from a weak constitution would formerly have succumbed to small-pox. Thus the weak members of civilised societies propagate their kind. No one who has attended to the breeding of domestic animals will doubt that this must be highly injurious to the race of man. It is surprising how soon a want of care, or care wrongly directed, leads to the degeneration of a domestic race; but excepting in the case of man himself, hardly any one is so ignorant as to allow his worst animals to breed….

The observation that prolonging longer than a state of nature would allow is “injurious” would pertain to anything that lifted up the human population, such as the wide availability of housing, food, medicine, and sanitation. Weird, right?

However, he then continued:

but if we were intentionally to neglect the weak and helpless, it could only be for a contingent benefit, with an overwhelming present evil. Hence we must bear without complaining the undoubtedly bad effects of the weak surviving and propagating their kind; but there appears to be at least one check in steady action, namely the weaker and inferior members of society not marrying so freely as the sound; and this check might be indefinitely increased, though this is more to be hoped for than expected…

Better that he finds mass death evil but it’s still weird that he finds some evolutionary “benefit” in letting the weak die, and hoped for some way to keep inferiors from propagating. There is every reason to believe that this passage helped encourage the rise of eugenic theory that led to mass sterilizations, segregations, economic regulations, zoning, and, later, grim experiments in population control and worse. The demographic panics of the late 19th century, and the resulting belief that human dignity is contingent and life expendable for larger aims, culminated in the 20th century’s wars, death camps, purges, famines, and mass murder by the state.

Even today, you can find people who regret the flourishing of humans with their incessant and chaotic breeding patterns. Extremists on the right can’t shake the sense that the wrong people are multiplying their kind while the right people are failing to breed enough – as if only ideology knows the best mix that is right for the world. Extremists on the left, meanwhile, are prone to believe that human life and industrial capitalism that has led to mass population increases are something to regret and control if not entirely tamp down. And this is one reason there is so much confirmation bias on the left with climate-change frenzies.

So let us return to basics: why should we defend human life and commit resources to preserving and prolonging it? Why cure disease rather than allow those weak enough to succumb to bite the dust so the strong can inherit the earth?

The answer is as follows. The great contribution of Enlightenment thinking was to settle on the idea of the value of human life and the belief that it should be protected and that all people should flourish in freedom and prosperity when possible. Human energies should be put to making human life better for as many people as possible. People have rights, and deserve to be treated with dignity. All people.

This is a modern view — perhaps taken over from Christianity’s early years (St. Augustine was passionate on this point on grounds that the human person is made in God’s image) but realized most fully after the rise of prosperity in the late Middle Ages. It became obvious for the first time that wealth could grow, that classes could be fluid, that life could be extended, that the population could grow and grow, that we could progress together. With that evidence came the entrenchment of a commitment to individual rights and a longing for universal emancipation and the good life for all.

A related commitment emerged to the cause of medical science not just to help the few but to improve the whole lot of humanity. That sounds like a great idea but not if we live in a zero-sum world in which your riches come at my expense or your good emerges only as a result of the harm imposed by others. But when it became clear – as Enlightenment theory had it – that there is no inherent conflict between the good of one and the good of many, a new moral imperative swept the world. The idea of “do unto others” became thoroughly operational in practice. “Act so that you treat humanity, whether in your own person or in that of another, always as an end and never as a means only,” said Immanuel Kant.

Over time, it became widely believed that to value and protect life from invasion by external forces is a core principle of civilization. This became the philosophical presumption on which modernity itself was built. Freedom was a corollary for both moral and practical reasons. Freedom works to build wealth for one and all; it was also the right thing to do to unleash as much human energy as possible in the quest for a better world.

Economic science became the handmaiden of this idea of universal rights for two reasons. First, economics explained precisely how it is that wealth can expand from the privileged few to the whole of society, such that we don’t have to steal to get a bit to eat and kill to live a long life. Second, economics innovated the concept of the “division of labor” which showed scientifically how everyone benefits from the cooperative work and creativity of everyone else. The “weak” are just as valuable to the building of human community as the “strong.”

This is why Adam Smith’s glorious two books – the Wealth of Nations and The Theory of Moral Sentiments – are such high contributions to human knowledge. They gave humanity the best reason ever to value itself and protect itself from any and all dangers. If one person suffers unnecessarily, we all are diminished. If we can use intelligence, creativity, and resources to aid anyone in need, we all benefit.

This is a philosophical proposition that turned to a moral commitment. It was this foundational belief that gave rise to the good life we live today, with long lives, universal access to amazing technology, food and health for all, and the daily struggle to improve life on earth without limit. We all benefit from this conviction, every day.

I dare say that many of us today are only alive because of this philosophical proposition. I know for sure this is true in my case.

This is why we should care.

No, humanity does not need a good old-fashioned plague every once in a while. We need ever better means of curing the sick, feeding the hungry, housing the homeless, prolonging the lives of the aged, and generally caring for the least among us, and we should do this in our own interest lest we too fall victim to the plight of the least fortunate.

Jeffrey A Tucker @jeffreyatucker
7 hours ago
Trump should get some competent and independent virus expert to give the whole nation and world a 30-minute seminar in basic virus knowledge, so we can at least restore what my mother knew 50 years ago. Fauci and Co. have been nothing but chaos.
View on Twitter
29
152

Jeffrey A Tucker @jeffreyatucker
10 hours ago
Thank you oh great one @MassGovernor for allowing us to eat outside, oh wise master of health and virus control, without whom we would surely all perish.
View on Twitter
24
126

Jeffrey A Tucker @jeffreyatucker
12 hours ago
The public loss of confidence in government is extreme.
View on Twitter
66
406

In reply tot0dd
15 hours ago
@t0dd0000 link to a story about these young healthy now dead people? sounds like national news to me.
View on Twitter
0
1

Jeffrey A Tucker @jeffreyatucker
17 hours ago
https://t.co/YwE8smgfy0
View on Twitter
1
8

Jeffrey A Tucker @jeffreyatucker
17 hours ago
"I stopped watching TV months ago. I do my own research. From what I've learned, the real problem is the government not the virus. I hope people learn from this." ~ wise words of a piano mover I just met
View on Twitter
66
292

Jeffrey A Tucker @jeffreyatucker
19 hours ago
"Active contact tracing is not recommended in general because there is no obvious rationale for it..." ~ World Health Org, just last year https://t.co/gCBqPv0jwY
View on Twitter
44
113