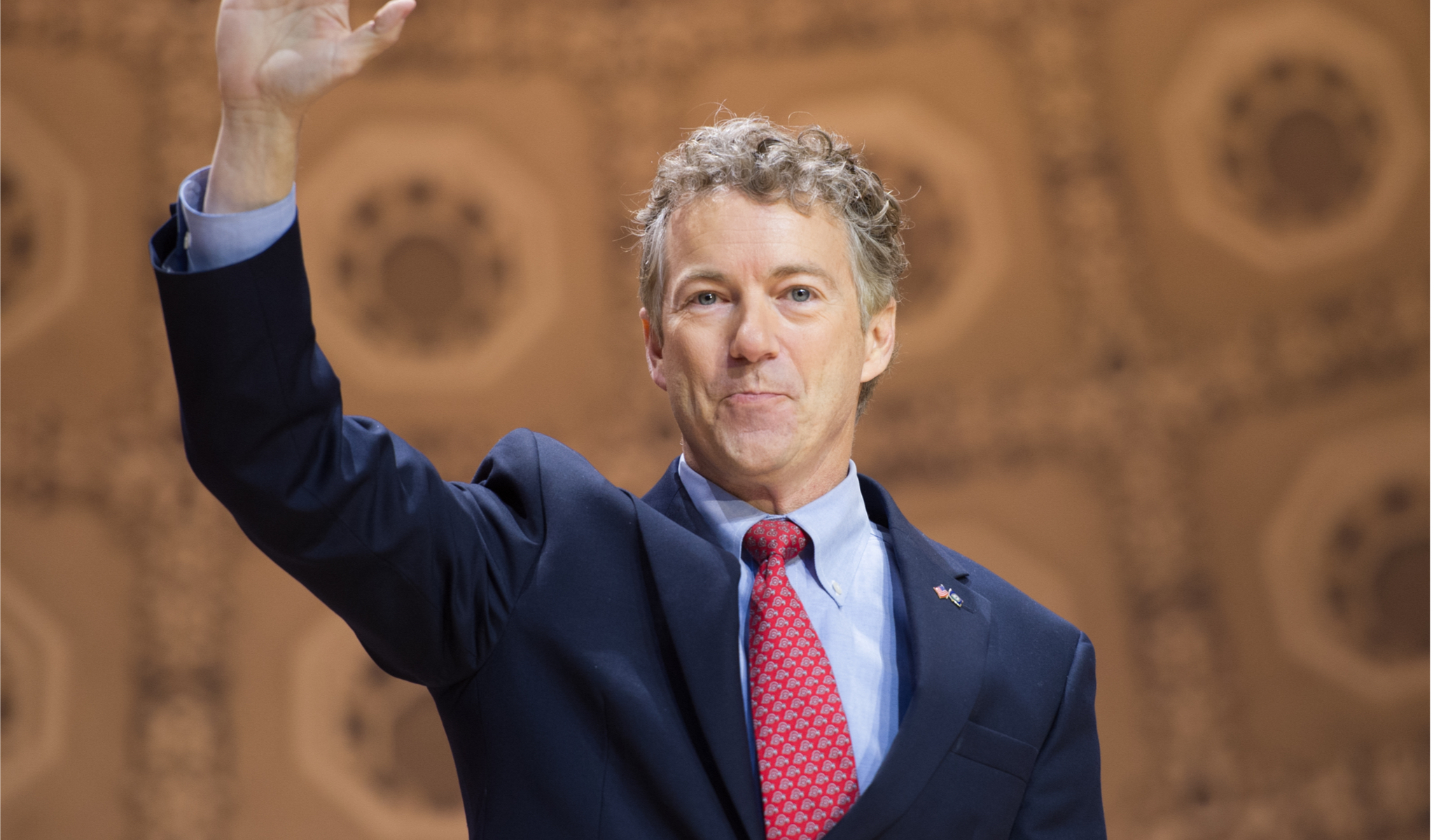 Xavier Becerra is an American politician and lawyer and is currently Secretary of the Department of Health and Human Services. He has no medical or scientific backgroud. Previously he was Attorney General of California, from January 2017 until March 2021.

Senator Rand Paul of Kentucky comes from a family of doctors, and earned his MD from Duke University and is a practicing physician.

In this remarkable exchange, the two square off on natural immunity and the vaccine mandates that Becerra is imposing on the entire country. This exchange will surely go down in history as one of the most striking and public denials of basic science and medicine in the modern age.

Mr. Becerra, are you familiar with an Israeli study that had 2.5 million patients and found that the vaccinated group was actually seven times more likely to get infected with COVID than the people that had gotten COVID naturally?

Senator I’d have to get back to you on that one. I’m not familiar with that study.

Well, you think you might want to be if you’re going to travel the country insulting the millions of Americans, including NBA star, Jonathan Isaac, who have had COVID, recovered, look at a study with 2.5 million people and say, well, you know what? It looks like my immunity’s as good as the vaccine or not. And in a free country, maybe I ought to be able to make that decision. Instead, you’ve chosen to travel the country, calling people like Jonathan Isaac and others, myself included flat earthers. We find that very insulting. It goes against the science. Are you a doctor or a medical doctor?

And you’re not a medical doctor. Do you have a science degree? And yet you travel the country calling people flat earthers who have had COVID, looked at studies of millions of people and made their own personal decision that their immunity they naturally acquired is sufficient. But you presume somehow to tell over 100 million Americans who have survived COVID that we have no right to determine our own medical care. You alone are on high, and you’ve made these decisions, a lawyer with no scientific background, no medical degree. This is an arrogance coupled with an authoritarianism that is unseemly and un-American. You, sir are the one ignoring the science.

The vast preponderance of scientific studies, dozens and dozens, show robust long lasting immunity after COVID infection. Even the CDC does not recommend measles vaccine if you have measles immunity. The same was true for smallpox. But you ignore history and science to shame the flat earthers, as you call them. You should be ashamed of yourself and apologize to the American people for being dishonest about naturally acquired immunity.

You want more people to choose vaccination. So do I. You want to lessen vaccine hesitancy. So do I. You want to have that happen? Quit lying to people about naturally acquired immunity. Quit lording it over people acting as if these people are deplorable and unwashed. Try persuasion instead of government cudgels. Try humility instead of arrogance. Try freedom instead of coercion.

But most of all, try understanding that there is no more basic medical right than deciding what we inject into our bodies. Today, after hearing that millions of people in a study prove, show without a doubt, that there’s a great deal of immunity from getting it naturally. Do you want to apologize to the 100 million Americans who suffered through COVID survived, have immunity? And yet you want to hold them down and vaccinate them. Do you want to apologize for calling those people flat earthers?

Senator, I appreciate your question and appreciate that everyone has their opinion. We follow the facts and the science at HHS. We use the expertise of the medical professionals, the scientists at HHS to make decisions. It’s a team effort and we rely on what is on the ground showing us results.

Except for the dozens and dozens of studies. In fact, most, if not all of the studies show robust immunity from getting the disease naturally. The CDC says if you’ve had measles and have immunity, you don’t have to be vaccinated. The same was true of smallpox. You’re selectively doing this because you want us to submit to your will. You have no scientific background, no scientific degrees, and yet you aren’t really concerned about 100 million Americans who had the disease. You just want to tell us: do as you’re told. That’s what you’re telling us. You want to mandate this on all of us. You’re going to tell us if I have 100 employees, you’re going to put me out of business with a $700,000 fine if I don’t obey what you think is a science. Don’t you understand that it’s presumptuous for you to be in charge of all the science?

Have you ever heard of a second opinion? I can’t go to my doctor and ask my doctor’s opinion? I mean, this is incredibly arrogant combined with this authoritarian nature that you think, well, we’ll just tell all of America to do what I say and they better or we’ll fine them or put them in jail or not let them go to school or not let them travel. The science is against you on this. The science is clear. Naturally acquired immunity is as good as the vaccine. The Israel study actually showing it better. This isn’t an argument against the vaccine, but it’s an argument for letting people make a decision who already have immunity. You’re not willing to consider natural immunity?

Senator our team has reviewed every study that’s out there on COVID, whether it’s from Israel, from the US or wherever else. They have used the facts that have been provided through the rigorous research that’s been done to reach conclusion 660-odd thousand Americans and more have died because of COVID. We’re trying to do everything we can to save as many as possible. We’re using the facts. We’re following the science and following the law.

Nobody’s arguing the severity of this, but you are completely ignoring the signs of natural immunity. So is Fauci, so is the whole group. You’re just ignoring it because you want submission. You want everybody just to submit to your will, do as you’re told, despite the evidence, the large body of scientific evidence that says naturally acquired immunity does work, is an important part of how we’re all going to recover from this. So is the vaccine. But when you add them together, we’re at a much different place than if you ignore them.

100 million Americans by conservative CDC estimates have had the disease. 200 million or more now have been vaccinated. It’s a good thing. Combined together, it’s how the disease is. Nobody wants to get the disease. We’re not advising anybody to get the disease. But if you were unlucky enough to get it, think of the nurses and doctors and orderlies who all bravely took care of COVID patients.

There was no vaccine for a year and a half. They took care of people, risked their lives. They got it, survived. And now people like you are arrogant enough to say you can no longer work in the hospital because you’ve already had the disease. We’re going to force you to take a vaccine that the science does not prove is better than naturally acquired. That’s an arrogance that should be chastened.

The post Rand Paul and Xavier Becerra Square Off on Natural Immunity, with Devastating Results appeared first on Brownstone Institute.

Jeffrey A Tucker · 5 hours ago
@jeffreyatucker
Sorry, watching this is a very guilty pleasure. https://t.co/nJ3cs4GAJE
View on Twitter
46
301

Jeffrey A Tucker · 7 hours ago
@jeffreyatucker
Extremely weird that @LinkedIn keeps censoring this article. Why? https://t.co/mbz8OluAwy
View on Twitter
19
48

Jeffrey A Tucker · 8 hours ago
@jeffreyatucker
The Science Too Is Captured https://t.co/85h6oW4lQi
View on Twitter
9
42

In reply to
I'll be sharing later some truly hilarious stories of our time together, such as the time that he served an ambassador and his wife raw bacon, much to everyone's horror. Anyway, a wonderful and brilliant man.
View on Twitter
0
40

In reply to
there was never a chance that Russia would nuke anyone because the workers were certain that if they ever tried, they would blow themselves up first. Decades went by without good replacement parts for anything as simple as tractors.
View on Twitter
2
36

In reply to
reformers, and set me and many straight that Gorbachev was in no way the liberal many in the West saw him as. In fact, Yuri's view was that Gorbachev's war on alcohol was what led to the undoing of the empire. Plus, nothing worked in Russia. Nothing. Yuri always knew that
View on Twitter
1
29

Jeffrey A Tucker · 8 hours ago
@jeffreyatucker
Very sad about the death Yuri Maltsev. Very soon after he defected from Russia (1989), we became fast friends and eventually best friends. We collaborated on many projects over those years, and his insights were invaluable. For he had worked closely with the Gorbachev team of
View on Twitter
9
101

Jeffrey A Tucker · 12 hours ago
@jeffreyatucker
The West Must Never Again Go Totalitarian https://t.co/zqC4im2VQ9 via @brownstoneinst
View on Twitter
18
72