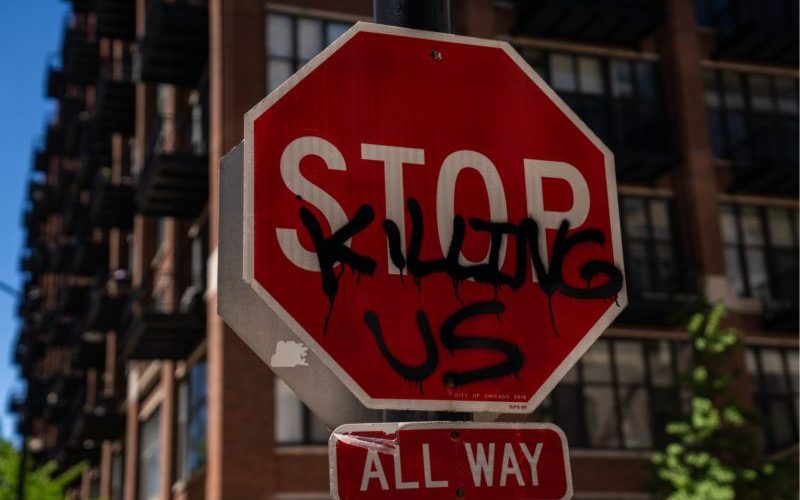 “Coronavirus hasn’t been a thing since Friday,” said a friend. “The new story is racism.”

For three months, all we heard was the danger to life and civilization presented by a novel virus. Millions will die! Few will be spared! There will be unprecedented suffering unless we completely shatter the normal functioning of life. Lock down, shelter in place, and stand six feet apart – very strange exhortations never before heard in the modern history of annual viruses or any public policy in many lifetimes.

All of it enforced by the police power. The same police power that eventually landed on the neck of George Floyd.

They screamed that we had to close schools, shopping centers, sports, and only allow “essential” business to function even if tens of millions lose their jobs, because lives – lives that the police power has utterly disregarded during the protests – are just that important. Lockdown required that the law change on a dime, in violation of every legal precedent, every slogan in American civic mythology, and contradicting the whole of what made America great.

In three days in mid-March 2020, everything we previously believed had to end because we had to implement a new experiment in social control as cobbled together by “public health officials” some 14 years ago. They sat around for a decade and a half, bored and waiting to use the new way to combat viruses. Any old virus would do so long as it was a slow news day. COVID-19 was as good an excuse as any. Out was every foundational belief in liberty, property, and free association, in the blink of an eye.

That was 75 days ago. People were surprisingly compliant, but what could they do? They were scared, thanks to media frenzy, and they weren’t allowed out of their houses to protest in any case. When they did defy the orders to protest in front of capitol buildings, instead of staying home and watching CNN, they were derided by CNN as disease spreaders and enemies of public health.

I’m looking at the headlines today and all the news on the coronavirus is below the fold or in its own section. It’s all about the protests, riots, and looters. Racism. Trump is screaming for a crackdown while the media demands justice for police brutality. As for social distancing, this was absolutely yesterday’s news. Now a new ethos has taken hold: gather in the largest possible groups to demand social justice. And loot.

Absolute hymns to the glory of protestors and even rioters are the rule of the day, as if the public health threat of COVID-19 is so last week. “Each night, tens of thousands exercise their right to assemble in protest and millions of Americans follow along at home,” writes the New York Times rhapsodically and correctly, failing to point out that this same venue said the opposite about lockdown protestors a few weeks ago.

Weeks! Is it an indication of the extremely short attention span of the American public or a demonstration of the sheer cynicism of media culture?

Meanwhile, on the corona front – yes that still exists even if you have to dig for information on it – states are still (still!) gradually ending the lockdown with cockamamie rules: you can sit (or stand) in bars but you can’t stand (or sit). Customers can buy things but not try on clothing. People can buy perfume but not spray on samples. In daycare facilities, the kids can play together in groups of more than 10 and they must stay apart, even though there is near zero threat to the kids from the virus.

These states that are imposing these crazy rules are four days behind the times. You look at the protests and you see free people doing what they believe they should do in the face of injustice. Many wanted to do this months ago but they were prohibited by law. The law eventually had to acquiesce to people’s sense of their human rights.

Why states do not instantly and immediately end all restrictions they wrongly imposed indicates the sheer stupidity of public policy, and the myth that it can ever be scientific. Instead we get curfews, even in the city that never sleeps.

The same governments that were only recently controlling your movements to protect you from a virus are now blasting people with tear gas.

As for lockdown “science,” the Centers for Disease Control keeps lowering its infection fatality rate. It’s becoming normalized like any virus: bad but not the end of the world. Best treated by medical professionals, not politicians – as we long knew until very recently.

The lockdown carnage from missed cancer diagnostics and forgone elective surgeries are only now presenting themselves. Then there are the 100 thousand wrecked businesses, the 40 million unemployment, the blown budgets of every government, the scary monetary policies. SWAT teams were entering bars to arrest people — in the name of health. Churches were shuddered on Easter. No restaurants, no shopping, no sports, no theaters, no gyms, no outdoor activities. We were all treated like animals, and told to cage ourselves in our homes. And so on it went for 75 days.

It’s hard to imagine a better recipe for social unrest.

Then the protests began. They were about the death of George Floyd, an unemployed man but they were also what he represented: the overwhelming presence of state violence in all of our lives.

Then the looting started. That too should not be a surprise. Lockdowners and looters use the same method (violence) to destroy property and commerce. One class of criminals learns from another class of criminals. It’s copycat criminology.

Now, as if to take that next step on the Road to Serfdom, all major cities have curfews.

Based on the speed and duplicity of the news cycle, we can predict with confidence that within six months, you won’t find a single person in public life willing to defend the lockdown. And yet it was this event that laid the foundation for the rest of the tragic unfolding of events that is wrecking this country.

There should be justice. There should be compensation. Political heads should metaphorically roll, along with the “public health officials” who advised them. And then we need a completely new direction: one that rejects the unscientific use of state force to battle a disease, recognizes the wisdom of the Bill of Rights and freedom, and treats people with the dignity that is inherent to every human life.

If we understand this desperate need – if we see what went wrong these months and the right way forward – we can rebuild. If we do not, the destruction and rights violations will continue.

Jeffrey A Tucker @jeffreyatucker
14 minutes ago
Because Gavin Newsom knows all about how to manage disease, far more about this difficult topic than the people he rules.
View on Twitter
3
12

Jeffrey A Tucker @jeffreyatucker
16 minutes ago
One slightly condescending way to read history is constantly to think: wow these people really sucked; we are so much better. That's no longer possible. Now we read history as a foreshadowing of how stupid and unteachable we are.
View on Twitter
11
42

Jeffrey A Tucker @jeffreyatucker
6 hours ago
If Trump can't fire Fauci, who can? He has some kind of lifetime job in which he can blather on about whatever he wants and there is zero check on his claims ?
View on Twitter
49
234

Jeffrey A Tucker @jeffreyatucker
8 hours ago
I've grown tired and distrustful of the anodyne term "social distancing": it is awkward and propagandistic, deliberately concealing the difference between choice and coercion. We need really to be speaking of forced human separation. Doesn't sound that great right?
View on Twitter
62
247

In reply toMichael Geer
12 hours ago
@MichaelGeer17 We've had a functioning system in place for a century of voluntary isolation in cooperation with medical professionals. Gov doesn't have to be involved.
View on Twitter
0
5

Jeffrey A Tucker @jeffreyatucker
12 hours ago
This book came out on April 2, and it still holds up. I believe it will someday be regarded as a classic. https://t.co/svUry6sdbK
View on Twitter
2
8

Jeffrey A Tucker @jeffreyatucker
12 hours ago
“What good reason have we to believe that these people in high government positions will make sensible decisions?” https://t.co/HO7zR1VO1r from @aier
View on Twitter
10
23

Jeffrey A Tucker @jeffreyatucker
12 hours ago
There is nothing wrong with the precautionary principle. But the choice to act on it should rest with individuals, not governments.
View on Twitter
50
201

Jeffrey A Tucker @jeffreyatucker
13 hours ago
Another look at C19 deaths in the US. https://t.co/MWsfWMEyiJ
View on Twitter

In reply tosav0ysix
14 hours ago
@Sav0ySix My tweet did nothing but report known facts on cases vs. deaths in Florida.
View on Twitter
0
4