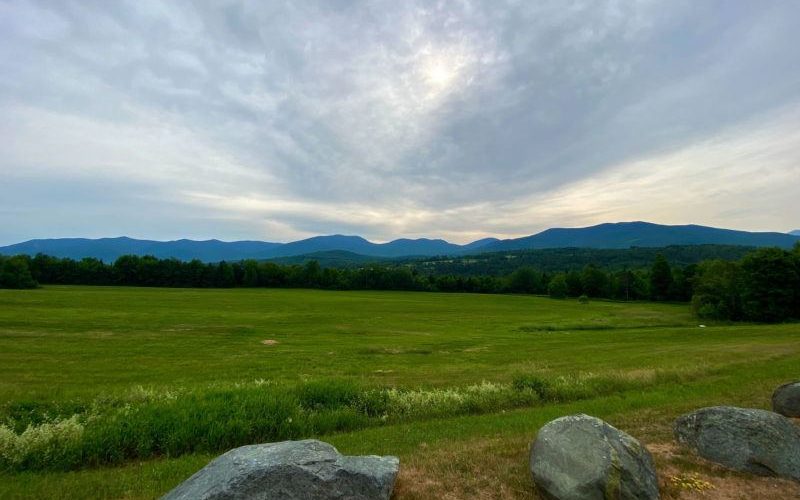 It was the 17th year for the Porcupine Freedom Festival in Lancaster, New Hampshire, held at the Rogers Campground. It was an unusually spirited, emotional, and powerful gathering this time, mostly because it took place in defiance of the fear-based culture that politicians and the media have been spreading for months. Hey, if Woodstock could take place during the Hong Kong Flu (which killed 100,000 Americans over the season), surely Porcfest should go ahead in the midst of whatever COVID-19 is.

Because of the lockdowns and mandatory closures, desolation and despair has swept through many areas of the country, with boarded up businesses, plexiglass separating people, and sadness all around. But here, for three days, all 400 or so of us got to experience something like what we might call the old world (meaning February and before): just happy people sharing ideas, eating, meeting, and enjoying themselves.

I’m sure that the organizers faced some pressure to call it off, but Carla Gericke looked past the propaganda and went ahead anyway. This year too was a bit different from usual, lacking some of the glitz and organizational formalism of the past. But we were no worse for it. There were talks on every aspect of health, economics, history, philosophy, commerce, crypto, firearms, COVID, and you name it. The main pavilion had something go on day and night, and there were mini gatherings all over the campground.

Most people camp but there are also cabins and hotels for people like me. Even then, there is no getting around the “roughing it” aspect of the conference. You don’t know where your next meal is coming from: that entirely depends on what food trucks happen to be there. Everything is on a “bring your own” basis. The view of the mountains from the campsite are remarkable and strangely therapeutic.

In fact, the whole event felt a bit like therapy for a traumatized people. Families drove from very long distances just to have a taste of social life again, to be around people, to find out answers concerning what the heck happened in this now windswept country of ours. You could see the tragedy and hope in people’s eyes. I had people I’ve never met break down in tears in my presence just from the happiness of the brief end to the isolation they’ve felt for months. The children were particularly thrilled to go without the muzzle for a few days and have friends with whom to run and play.

Phil Magness did a masterful presentation of his research on the failed history of coronavirus modeling. His focus was on the main proponent of lockdown: the now famous but daily discredited Neil Ferguson and his wild predictions of many millions dead. He more than anyone was responsible for setting off a bandwagon effect of lockdowns that came to the UK and the US, policies which had no significant effects on cases or deaths, wrecked the businesses and lives of millions, hollowed out hospitals with the banning of elective surgeries, and ended up distracting medical professionals from the one thing they could have done to have reduce the death toll: focus on the nursing homes that accounted for 43% of American deaths.

I’ve seen trolls online call this event Covidfest but this is just ridiculous. In New Hampshire, in particular, 80% of deaths from Covid occurred among the population living in long-term care facilities. According to the CDC, fully 91% of 311 deaths in the state from Covid-19 are from among people over 65 years of age with underlying health issues.

Think what that means: the statistical probability, based on known data, that attendees to Porcfest could die from getting Covid approaches zero. And yet, the organizers still faced restrictions on what kinds of businesses could be there and mandates to hand out condescending leaflets on social distancing and so on.

And yet the conference went on. That alone served as great inspiration to everyone present: we have to take back our lives from the lockdowners.

I was thrilled to be granted a full two hours for my talk, in which I shared everything I’ve learned these last months on the history of viruses, pandemic policy in the United States, and the origins of the lockdowns in 2006 during the presidency of George W. Bush. This was the turning point for the Centers for Disease Control, and the real beginning of the politicization of disease. The modelers prevailed over the medical professionals and Bush ordered the CDC to adopt its policies to include shutdown, closures, and lockdowns. It was a tragic moment against which the medical professional protested with passion and wisdom. For fourteen years, these plans have been sitting there, ready to be deployed, during which time, the virus hobbyist Bill Gates and his money boosted lockdown theory and the view that the only way to achieve herd immunity is through a vaccine, as if there were no such thing as natural or acquired immunity at all. All of this was put in place without any serious concern from things like freedom, prosperity, peace, or social functioning. It was a mad and immoral social experiment and we see the results fully predicted by the medical professionals back in 2006:

Experience has shown that communities faced with epidemics or other adverse events respond best and with the least anxiety when the normal social functioning of the community is least disrupted. Strong political and public health leadership to provide reassurance and to ensure that needed medical care services are provided are critical elements. If either is seen to be less than optimal, a manageable epidemic could move toward catastrophe.

Catastrophe is a pretty good term to describe where we are today. And yet if you turn on the television you can see that the whole discussion has turned from deaths from Covid-19 to Cases. The reason for that is the deaths are down 90% from their peak. Cases are indeed up, but that was precisely what was supposed to happen under the theory of “flattening the curve.” Does anyone even recall that the purpose here was to push cases into the future somehow to preserve hospital capacity? It was never theorized (back then) that hiding from a virus makes it go away. Moreover, the cases we are seeing today are overwhelming among young people for whom this virus is hardly a disease at all. Looking at the media hysterics right now, you almost get the impression that certain people do not want this virus to go away the way most all viruses do: people acquire immunities to it.

All that aside, we used to speak of this country as the land of the free and home of the brave. Our response to his virus has sacrificed freedom based on fear. Rather than focusing on the actual problem — vulnerable people in nursing homes, many of which were actually forced to take in Covid-19 patients — we shut down nearly the whole country for absolutely no reason.

I recall the first time I attended Porcfest. I was amazed at what I saw. These are people for whom freedom is not just a theoretical parlor game played by intellectuals. Freedom for the people at this event is something that is embraced as a life principle, something to be applied with bravery, determination, and joy. By holding the event this year, Porcfest kept its great tradition. And made a huge contribution to many people’s lives: for many, it was the only normal thing they have experienced in three months.

Jeffrey A Tucker @jeffreyatucker
1 hour ago
Whoa, it turns out that deploying government to control a virus might even be more error-prone than planning an economy. https://t.co/d1HQbLcTVH
View on Twitter
16
30

Jeffrey A Tucker @jeffreyatucker
1 hour ago
We are learning about the real operation of journalism in this country. If you are aspirational, you must tow the line or risk being marginalized. That's enough to explain why we see so very little lockdown dissent in the big media.
View on Twitter
16
84

Jeffrey A Tucker @jeffreyatucker
2 hours ago
The Case for Lockdown Reparations https://t.co/0Stjq9sNKZ from @aier
View on Twitter
6
17

Jeffrey A Tucker @jeffreyatucker
3 hours ago
All must bow to the technocratic discipline of the disease mitigators. And notice too how little medical therapeutics even figure in here. It’s not about making people get better. It’s about controlling the whole of life. https://t.co/jAdGWnrshA from @aier
View on Twitter
41
84

Jeffrey A Tucker @jeffreyatucker
3 hours ago
The lockdowners have had surprising success in convincing people of their wild views. You only need to believe that virus avoidance is the only goal for everyone in society, and then spin out the implications from there. https://t.co/jAdGWnrshA from @aier
View on Twitter
21
64

Jeffrey A Tucker @jeffreyatucker
3 hours ago
Lockdown: The New Totalitarianism https://t.co/jAdGWnrshA from @aier
View on Twitter
8
21